A few weeks ago, my mum, brother and I set off on a trip to the UK for my cousin’s wedding. Since the majority of my family live across there, we travel over quite often. However, for this trip, we were tempted to do something a little bit different and book a side trip to a place we had never been before. I was incredibly excited to find out that Edinburgh was on the cards. We were only in the UK for two weeks, so we knew that whatever trip we booked, couldn’t be longer than two days. After a lot of umming and ahhing whether it would be worth our while to travel to Edinburgh for a mere 48 hours, we finally decided to bite the bullet and book a one night’s stay in this magical city and I am SO glad that we did.  After exploring the winding, cobbled roads, lusting after the copious amounts of cashmere tartan scarfs and gaping at the many incredible, historical buildings, I can confidently say that Edinburgh has won over a piece of my heart.

The good thing about going on a trip where you know you don’t have much time; is that you ensure you make the most of every minute of the day.  30 000 steps and many coffees later, I can honestly say that I fully experienced Edinburgh. Of course, there were MANY other things that I wish we had the time to do, but I thought of these as more of an excuse to come back. So, without further ado, here is my advice on and experience of Edinburgh in just 48 hours! (Grab some snacks folks, you’re in for a long one!)

Check in and explore the Royal Mile

Since we were only in the city for one night, we decided to book into a hotel that was extremely central. This was one of the best decisions we made because it saved us a lot of time and money that we would have spent on transport in and out of the city. My mum and I shared a room in the newly built Premier Inn on the Royal Mile. The hotel was very clean and comfortable. I highly recommend it for a short trip. My brother was lucky enough to spot a deal in the hotel right next door to us called the Hub. Although the room was about as big as Harry Potter’s stair case bedroom, the technology made up for it. You could control everything from the temperature of the room to the do-not- disturb-sign on your front door from an app on your phone.  It’s what I imagine the future of hotels to be. You should definitely check it out!

After checking in and playing with the buttons in my brother’s room for a bit, we headed straight out into the crisp “summer” air for some exploring. The first thing on the list was the famous Royal Mile. 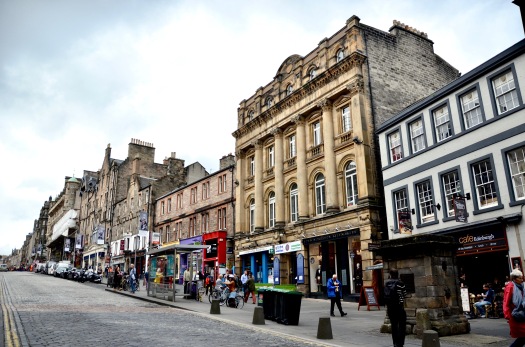 I will admit, this was an unmissable experience, but it was my least favourite part of the trip because of the sheer amount of tourist and overly-priced shops. If you’re wanting to explore this part of the city, I recommend that you get up early to try miss the crowds. Other than that, we loved venturing into the endless amounts of traditional Scottish shops. Not realising that there is one every four metres, I picked up a tartan scarf in the very first Scottish-looking store I saw as a little souvenir. Only later did I turn the label over to find “made in China” in fine print. We walked on, enjoying the jaw-dropping scenery and the unmistakable sound of bagpipes.

We made the decision not to go into the castle itself in order to avoid long lines and wasting time, but we knew that we could not leave Edinburgh without at least seeing it from the outside. It did not disappoint! We spent ages in the freezing cold wind taking photos of it, but nothing could quite capture its greatness. 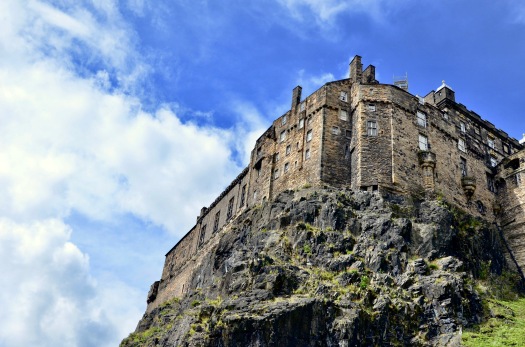 Walking around the castle was an incredible experience because of the magnificent views from the road. We even got a glimpse of the icy-looking sea and many other magical-looking buildings. 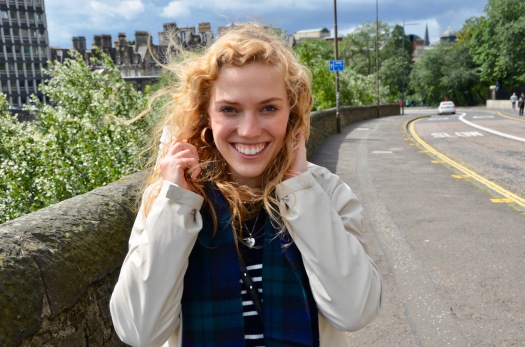 Next on the agenda was a good dose of shopping. We headed through the gardens which lead us to Princess Street; the hub of fashion in Edinburgh. To my dismay, Anthropology, All Saints and French Connection were just as expensive as I imagined them to be. However, I did decide to splash out on the best smelling candle EVER (seriously) from Anthropology. Again, I was constantly in awe of the incredible buildings around us. They certainly made up for the unsuccessful bargain hunting experience 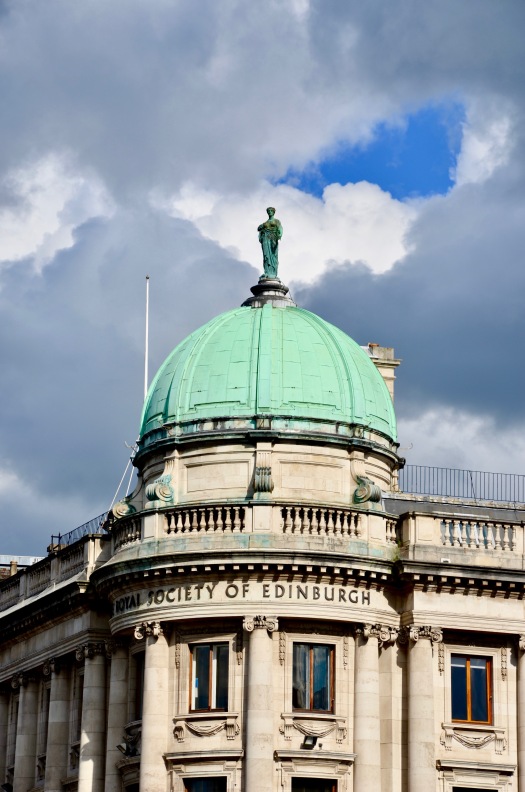 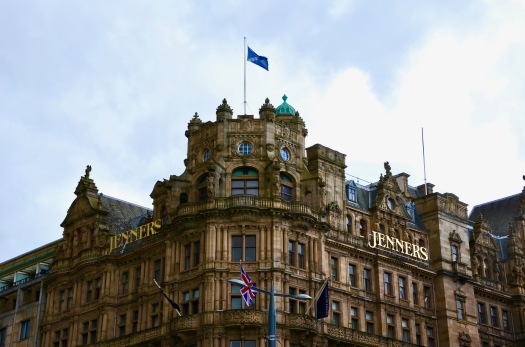 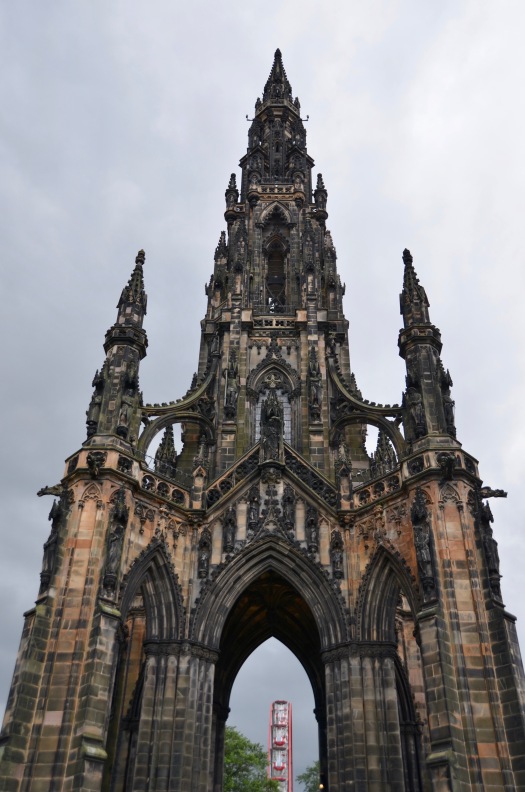 Lunch and coffee in Rose Street

After all the walking we decided that it would be a good idea to stop and refuel. We were very pleased to stumble upon Rose street which was full of quaint coffee shops and vibrant pubs. Trying to avoid Black Pudding at all costs, we chose a local bakery which lured us in with the smell of freshly baked bread. Needless to say, the locals can certainly cook up a storm! After eating my weights worth in fresh falafels and apple pie, we explored the rest of the street, stopping off in a cute coffee shop along the way. I soon learnt that the locals of Edinburgh take coffee very seriously. Each cup I had was brewed to perfection. If you’re a coffee connoisseur (or you just want a really cool Instagram photo), Edinburgh will not disappoint you! 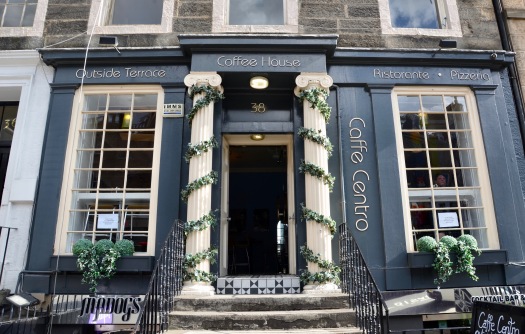 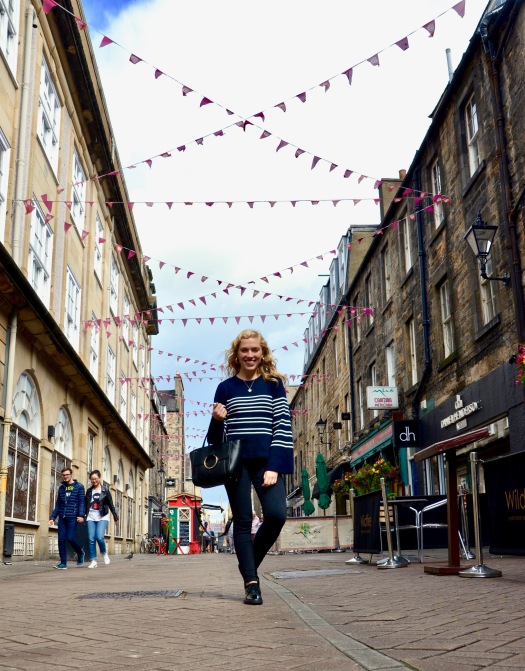 It turns out that Edinburgh comes alive at night. The buildings all become golden as they reflect the streetlights, the pubs roar with live music and jolly singing, the restaurants are all lit up beautifully by candle light and you can pretty much guarantee that you’ll stumble upon a few interesting characters who have had one too many pints (harmless, nonetheless). We were spoilt for choice when it came to picking the perfect restaurant to eat at that night. Surprisingly, we chose a small Italian restaurant called Bella Italia because most of the restaurants were either too full or out of our price range. I will admit that I was rather disappointed because I usually make an effort to eat a traditional meal in whichever country I am in. However, after receiving the food that we ordered, I quickly changed my mind as I devoured the best pizza I have EVER had (even giving Italy a run for their money).  After dinner and a couple of delectable Sanpelengrino-infused Mojitos, we continued to explore the city (slightly more jolly than before our meal). If you travel to Edinburgh sometime, do yourself a favour and make sure that you explore it at night! 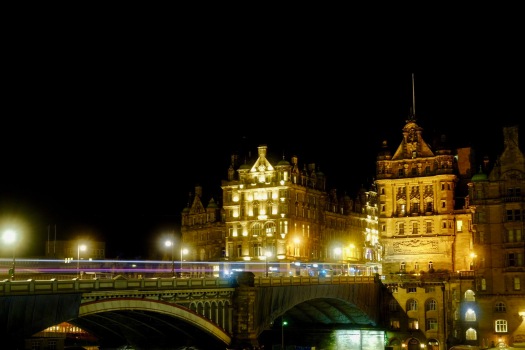 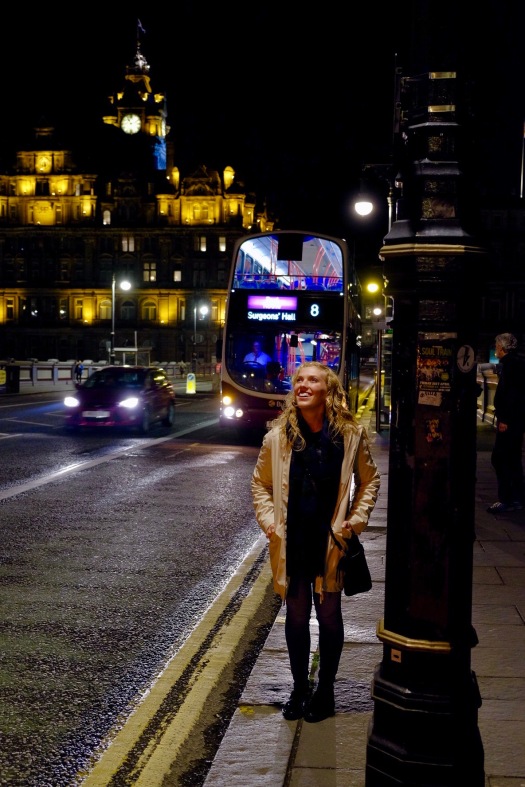 Grassmarket for breakfast and (of course) coffee

The Grassmarket area is one of the most vibrant, lively and picturesque areas in Edinburgh. We were determined to find something healthy for breakfast to set us up for a busy day and the Grass Market area is swarming with plant-based restaurants and organic delis. I was delighted to discover Hula, a brightly coloured, health café along one of the most picturesque roads I have ever seen. I sat drinking something that looked like it could have been taken out of a Dr. Sues book – my first ever Macha Latté (can’t say I’d recommend this…). Instead of ordering a side of green eggs and ham to match my drink, I decided to go with an Acai bowl. I may not be able to pronounce the name, but I can tell you that it was very fruity, healthy and fresh – just what I felt like! 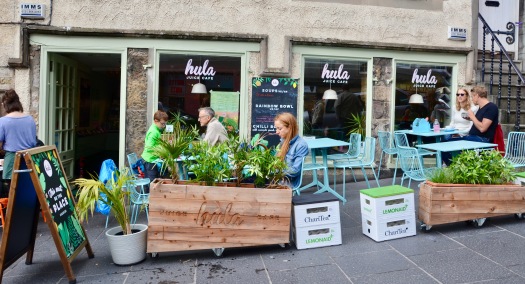 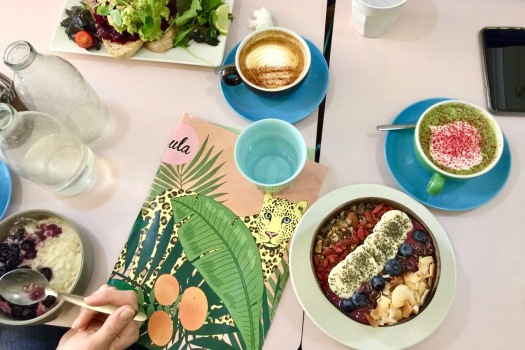 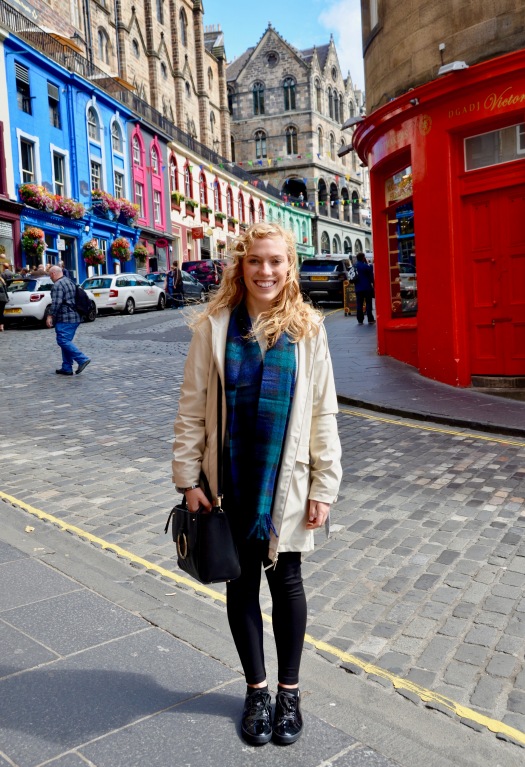 After breakfast we explored the rest of the area, venturing into interesting little vintage stores that caught our eye. My mum managed to pick up a royal blue vintage cashmere jumper for just twenty pounds! One of my favourite stores was one dedicated to hats. For those of you that don’t know me, I have a slight obsession with hats. However, since they were all well over 100 pounds each, I just made use of the photo opportunity. 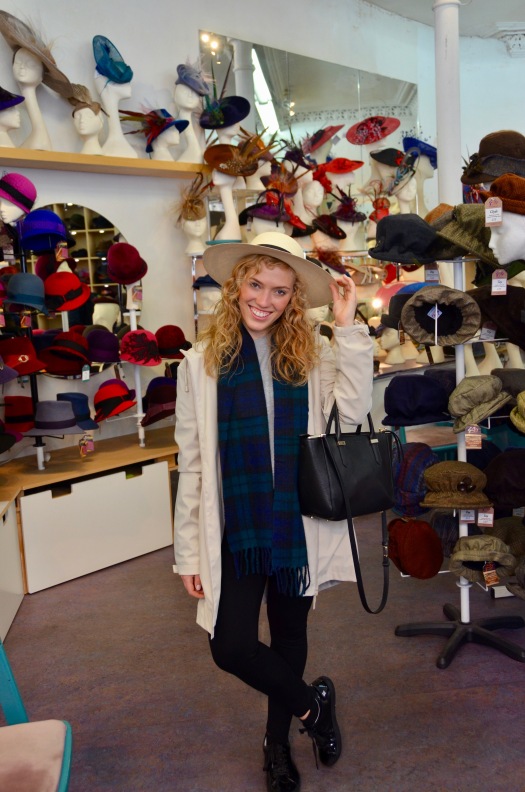 Since the area is known for its delightful coffee shops, we decided to pick one and give it a try. We stumbled upon Cairngorm Coffee Co. where they served us coffee that tasted as if it were made in heaven. Worried about my caffeine addiction yet? Yeah… Me too! They also served us creamy avocado on fresh ciabatta with lemon juice and chilli flakes (drooling yet?) 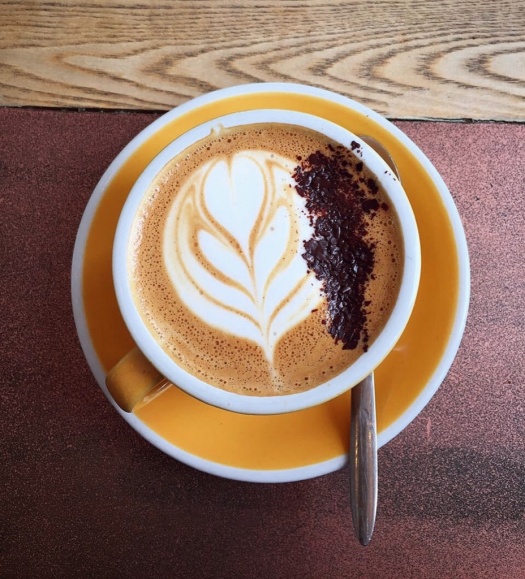 Visiting Den Village was probably the highlight of my trip to Edinburgh. The beautifully quiet village was truly enchanting. It is a great place to completely get away from the crowds and it will also make you believe in fairy tales. As we wandered next to the river that flows through the village, you could hear nothing but the movement of the water and the chirping of birds. It was incredibly tranquil. Not only is Dean village good for the soul, it doesn’t photograph too badly. Many photographers come from around the world trying to capture its true essence. I will admit that this is incredibly hard to do and my photos just don’t do it justice! 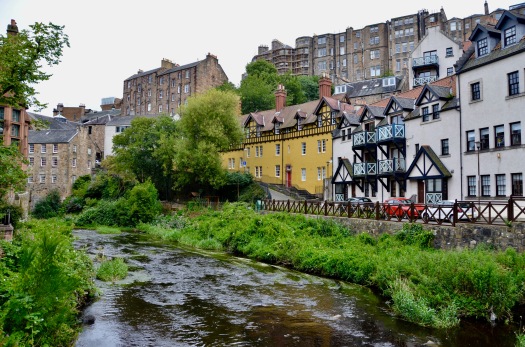 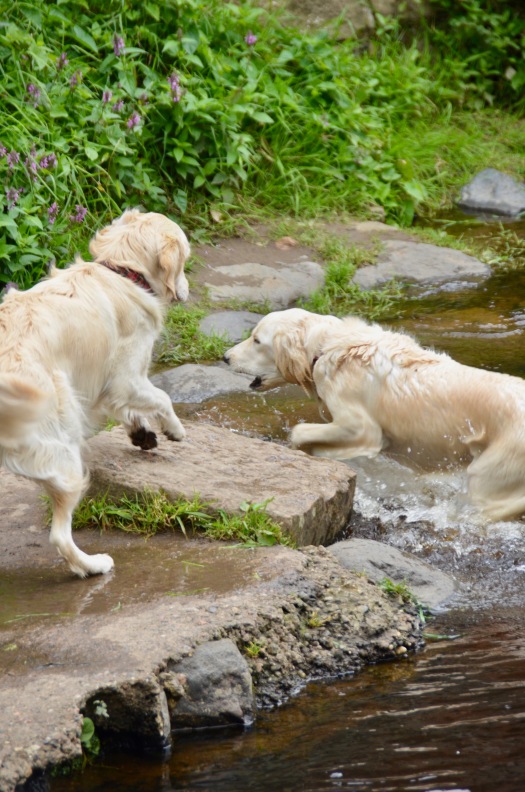 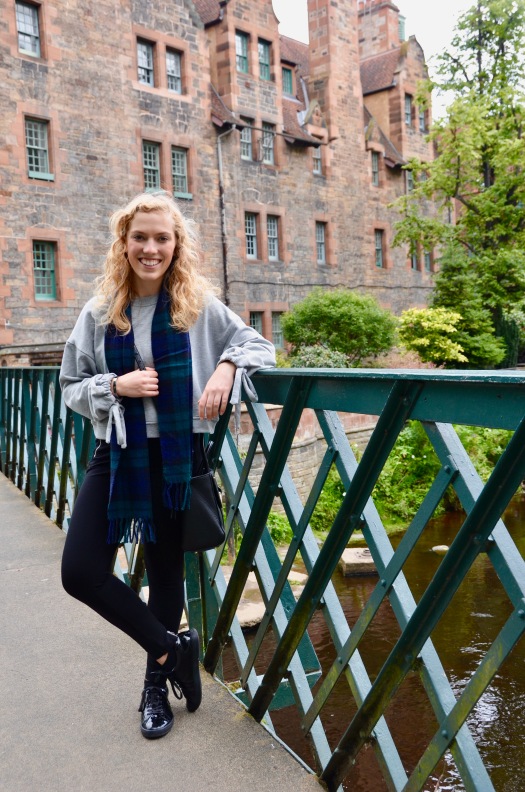 As we walked away from the peaceful silence of Dean Village, we headed towards one of Edinburgh’s hottest tourist attractions; the Camera Obscura. I will admit that this is a great activity to do if it is bucketing down (which tends to happen quite a lot in Edinburgh). The gallery includes six floors, a roof top tour of the city and a lot of good laughs. My favourite exhibition must have been the vortex tunnel. It’s incredible how your mind can play tricks on you with some clever lighting. I wasn’t even able to walk through the whole tunnel! Another reason to visit the Camera Obscurer is the view from the top! It’s a great way to get a glimpse of the entire city and the perfect way to end a great trip. 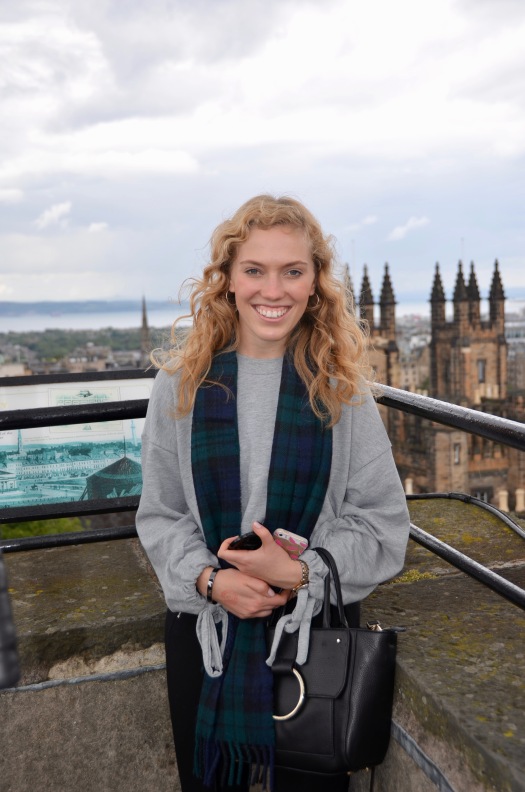 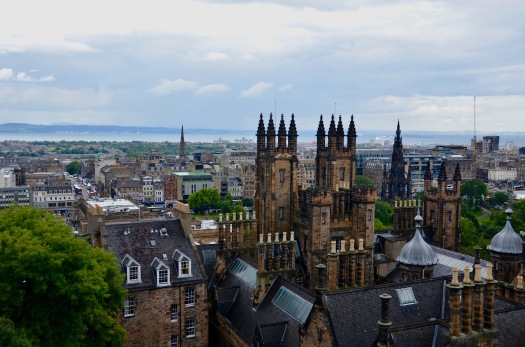 7 Replies to “How to spend 48 hours in Edinburgh”

Hi I’m Jenna! I’m a 22-year-old fashion and lifestyle enthusiast, coffee addict and pink obsessed marketing student living in one of the most beautiful cities in the world (fact).  I have no idea what’s next, but I’m excited to find out! I hope you’ll join me on my adventures.

I can also be found on: